Inside the EU’s £37million ‘Closed Controlled Access’ migrant center that spans a Greek island and will host 3,000 arrivals – a far cry from Britain’s chaotic system of housing them in dormitories hosts

By David Barrett Home Affairs Correspondent for the Daily Mail

It’s a far cry from the chaotic British system, where many migrants are picked up from beaches and placed in random hotels, bed and breakfasts and hostels.

This new purpose-built facility on the Greek island of Samos has the capacity to house 3,000 asylum seekers in clean and safe container-style accommodation units.

On site, there are seven basketball courts, three playgrounds, a soccer field, and eight canteen-style restaurants, as well as the air-conditioned accommodations.

Those arriving in Samos from North Africa and the Middle East are free to come and go from the center which is a stone’s throw from the clear blue Aegean Sea.

A purpose-built £37million facility (pictured) on the Greek island of Samos has the capacity to house 3,000 asylum seekers with basketball courts and playgrounds plus accommodation units container type

Six years after a million Syrians fleeing the civil war passed through the country en route to mainland Europe, the camp is touted as a ‘faster and fairer’ way to process asylum seekers than the current jumble ad hoc solutions.

However, the £37million facility has not received universal praise, with some calling it “prison-like” due to its tall fences and watchtowers along the perimeter.

But it’s a far more humane destination than the dangerous and unsanitary conditions experienced by migrants in the slums it replaces, according to the Greek government.

Authorities this week began moving asylum seekers who had been living in a squalid camp near Vathy, Samos’ main town, to the new facility, dubbed a “closed controlled access centre”. 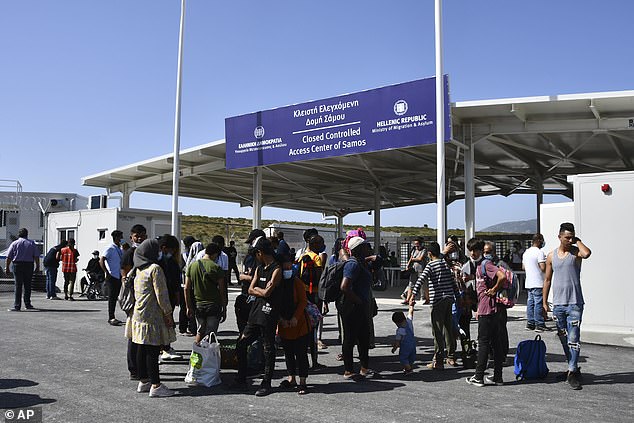 Those arriving in Samos from North Africa and the Middle East are free to come and go from the center with gates (pictured) open from 8am to 8pm, and a bus runs to and from the main town four times a day day. 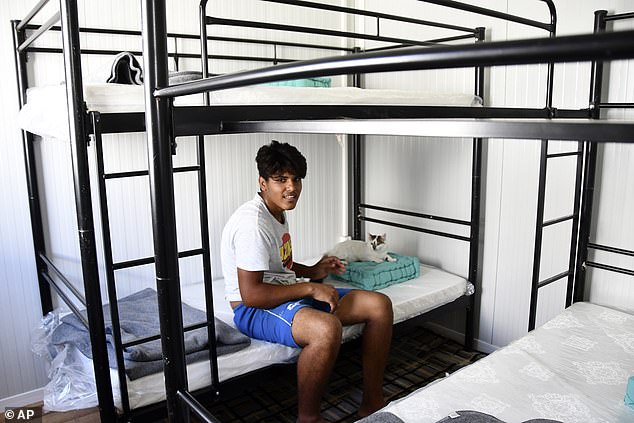 Neat and clean: A migrant and his cat move into the new air-conditioned living quarters

It could inspire the accommodation for asylum seekers the government wants to build in the UK as a long-term alternative to temporary hotel and hostel rooms. The site was even visited by Home Secretary Priti Patel last month.

Currently, most asylum seekers in the UK are housed at taxpayers’ expense, with the cost of the system soaring by more than a third in the last year to nearly £1.4billion.

Official figures show that 62,817 asylum seekers were receiving taxpayer-funded support at the end of June. Most are housed free of charge, either in social housing or privately rented.

But as the number of arrivals across the Channel soared last year, the Home Office was forced to use hotel rooms. 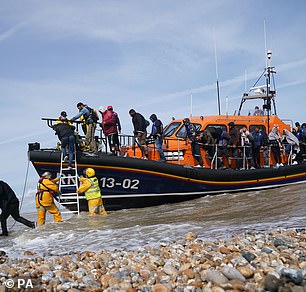 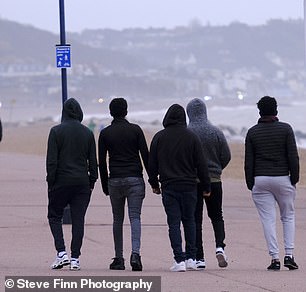 In the UK, however, many migrants are picked up from beaches (pictured left in Dungeness, Kent) and placed in random hotels, bed and breakfasts and hostels. Pictured right: Migrants on the seafront at Hythe, near Folkestone

Earlier this week, senior Home Office official Matthew Rycroft told MPs the hotels would be used for asylum seekers – including those who fled Afghanistan – for years to come.

The Samos facility is the first of five planned by the EU, with Brussels allocating a total of £215million for similar reception centers to be built on the other Greek islands of Kos, Leros, Lesbos and Chios. Greece has become the main migration route by boat to Europe. But Patrick Wieland of Médecins Sans Frontières compared the new center to a prison.

He said: “It is the perfect illustration of the criminality of EU migration policy – detaining and detaining people fleeing violence and punishing them for wanting to be safe.” It’s a shame.

Greek Migration Minister Notis Mitarachi insisted that his country “will not be a gateway for the flow of illegal migrants to Europe” and that it will “decisively protect the external borders of the EU”.